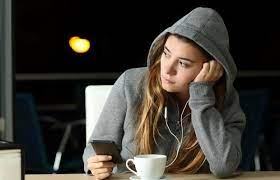 Many people are confronted with the effects of isolation due to corona. But what if you always have to deal with this situation? In the Netherlands there are at least 80,000 children who not only now, but always live in social isolation and have worries and problems at home. Because of these problems, children can develop less well. Because they grow up in families that receive little support from their environment and find it difficult to make friends themselves, their development is even more at risk. The impact is great.
Het Vergeten Kind conducted research into the impact of social isolation among children with difficult home situations. The foundation interviewed 38 young people and 35 parents who experienced it themselves. 154 social workers who work with children in isolation completed a questionnaire. Children who have problems at home and grow up in isolation appear to be dealing with five elements:

their entire family receives little support and is on their own. 91% of parents have too few people around them they can ask for help
children find it difficult to make friends. 94% of parents say that their children never, or sporadically, bring friends home.
Children have to change schools. 77% of the children in this target group had to change schools, an average of three times. For example, due to bullying, an out-of-home placement, relocation after a divorce or a transfer to special education.
Children are excluded and bullied. 50% of the children have been bullied and/or excluded, both by children and adults and 72% feel alone, misunderstood and insecure.
A (possible) custodial placement makes the social network even smaller.
SOCIAL ISOLATION HAS MAJOR CONSEQUENCES FOR CHILD DEVELOPMENT
Children find it difficult to get out of their isolation. Prolonged isolation has major consequences for a child’s development. It is a risk factor for domestic violence. We also know from previous research that isolated children on average have less self-confidence and suffer more from feelings of depression and anxiety. They are more self-harming and more likely to have suicidal tendencies. Their brain development can also be affected by isolation. Young people who leave youth care without support from their network are more likely to have no job, no stable housing and no education. They have more problems with crime, violence in relationships and drug and alcohol use.

RESISTANCE PROVIDERS: u2018 SOCIAL NETWORK IS NECESSARY, BUT TOO LITTLE TIME TO HELP YOU2019
Responders recognize this plight of children and would like to help them out of it, according to this research. Nevertheless, according to them, it is difficult in practice to strengthen a child’s network. For the majority of care providers, 62%, this succeeds far too little or only in some cases. Especially care providers in a living or treatment group get little time for this. Aid workers say that building a network requires a lot of time and attention and that there is none.