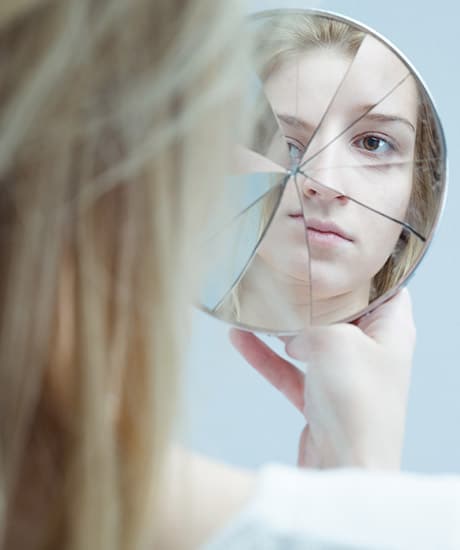 Both children and young people can feel very insecure at a certain stage in their lives. In most cases this seems to coincide with a life event, for example starting in a new group, entering into or breaking up a relationship or if things have been unsettled at home for a while. Physical changes such as a growth spurt or puberty can also temporarily influence self-image. The body then feels very strange for a moment and it takes time to get used to this. You may feel awkward and insecure for a while.

How do you signal a negative self-image?

It is not always clearly visible when young people struggle with a negative self-image. During puberty, young people do not always flaunt their feelings. In addition, it is normal during this period for young people to experience periods of doubt and uncertainty in their search for their own identity. When these periods of uncertainty drag on for a long time, it is important to be aware of signs that may indicate a negative self-image:

Uncertainty is noticeable in children when they behave differently than parents or teachers are used to. For example, children can show remarkably shy, restless or busy/funny (clownish) behavior in certain situations. It is also possible that the child ‘let it be known’ through physical complaints that it is not feeling well. For example, stomach ache, headache, eczema or other rash, nausea or tired / no energy.

Young people often show less on the outside, they are often confused with themselves, the other, the school, their identity and meaning of life. They are bombarded with unpleasant thoughts. How do you filter those negative thoughts about yourself and how can you face life with more guts and positive energy? Young people with low self-esteem can end up in a negative spiral.

With a negative self-image, you feel that you do not live up to what is expected of you. You are afraid of making mistakes and that may make you very perfectionist, or doubtful and not very enterprising. This way you prevent things from going wrong and you don’t have to feel even worse about yourself. But this way you don’t dare to take any risks, so you can also gain fewer moments of success and positively supplement your self-image.

Girls more likely to have a negative self-image

Girls suffer most from a negative self-image, especially around the age of fourteen. Girls are more dependent for their self-image on what their peers think of them than boys are. For boys, their own achievements are the most important for a positive self-image. The appearance of girls also plays a role. The appearance changes during puberty and this is often accompanied by a lot of uncertainty.

At primary school, less independence is often demanded from girls than from boys. Boys are expected to perform more individually and stand up for themselves more. As a result, boys can manage better among peers. Moreover, they are better able to stand up for themselves in front of their parents. Boys are often given more freedom. Girls are allowed less; for example, they have to come home earlier and are expected to ask for help if they fail at something. Less independence and this can increase uncertainty and lower self-esteem.

Young people from ethnic minorities can become confused because they often do not have a clear picture of themselves in their heads. What do they belong to? Which culture do they fit best with? What do they want to retain from their original culture? And is this possible/allowed? They can be swung back and forth. For young Muslims, a negative image of Muslims in society can be detrimental to their self-image.